The Elite Neon Cup will be held in accordance with the FIFA rules. If the maximum registration of the groups before the deadline is achieved, registration will be closed before the scheduled date. The first teams to make quicker entries will have a greater chance of participating. Participation is guaranteed if all payments are made and confirmed.

Professional teams selected academies, as well as all the clubs that are members of the FIFA Associated National Associations.

4. Structure of the Tournament

The tournament starts with the group stage. Teams/Clubs are divided into groups, and matches are played by following the round-robin system. All the teams will play 5 or 6 games.

The tournament will have at least 12 teams per age category. The teams that will pay their first instalment will have priority. The team is officially registered only after payment of the advance.

1.1. The Elite Neon Cup will be played in accordance with FIFA rules.
1.2. Group Stage:
1.2.1. At the group stage, teams are divided into groups, where all the teams will meet in a round robin series. Ranking between the teams will be decided according to the gathered points. Three points will be awarded for the win, one point for the draw and zero points for the defeat.
1.2.2. If two or more teams are equal on the basis of the above criteria, their rankings shall be determined as follows:
a) greatest number of points obtained in the group matches between the teams concerned;
b) goal difference resulting from the group matches between the teams concerned;
c) greater number of goals scored in group matches between the teams concerned;
d) greater number of points obtained in the fair play conduct of the teams based on yellow and red cards received in group matches as follows:
– yellow card: minus 1 point
– indirect red card: minus 3 points (as a result of a second yellow card)
– direct red card: minus 4 points
– yellow card and direct red card: minus 5 points
e) Penalty competition according to FIFA rules.
1.3. Playoffs A,B,C
All the teams will play playoff matches according the placement to the group stage.

3.1. The maximum number of players per team is 24 and the minimum is 16 players
3.2. All players must be able to prove their age and identity.
3.3. All players must use the same number in their kit throughout the tournament.
3.4. Teams can use all players from the squad list in a match.
3.5. For substitutions, players must follow the following rules:
3.5.1. A player who has been replaced may not return to the match.
3.5.2. The sub takes place without stopping the game.
3.5.3. Subs must be made in the centre line of the field (centres).
3.5.4. A player may enter the field only when his teammate is out of the playing area.
3.5.5. Incorrect subs will be penalized with a yellow card.
3.5.6. If a goalkeeper is replaced, the game must be stopped and the referee must be informed.

4.Duration of the matches

5.1. Squad List:
5.1.1. In all games, it is mandatory to complete the squad list.
5.1.2. The list must be delivered to the referee before each match.
5.1.3. Team coaches must confirm the numbers in players’ jersey before handing over the list, in order to avoid any errors in the statistics service.
5.1.4. Each player’s number in the squad list must be the same as the number he is wearing.
5.1.5. All players included in the squad list are deemed to be participating in the match.
5.1.6. Random checks will be made from the tournament management throughout the tournament.
5.2. Jerseys
5.2.1. Numbers are mandatory.
5.2.2. The number of the player in the squad list, must be the same in his jersey.
5.2.3. All jerseys must be numbered and must correspond to the numbers listed in the squad list.
5.2.4. The numbers must be on the back of the jersey.
5.2.5. Two players can not use the same number in any match.
5.2.6. No player can change his number during the match.
5.2.6.1. Failure to comply with this rule will punish the player with a yellow card and he must exit the pitch to get the right jersey.
5.2.6.2. The player may re-enter the match when properly dressed and with the consent of the referees.
5.2.7. If two teams have the same colour of jerseys, the team that first appears in the program should change jerseys.
5.2.8. The use of shin guards is mandatory in all competitions.
5.3. Before and after the match:
5.3.1. All teams must be ready on the pitch 15 minutes before the start, with appropriate documents for age control.
5.3.2. The coach/team manager of the team must make sure that his players are insured.
5.3.3. The teams are responsible for the behaviour of their fans.
5.3.3.1. Teams can lose a match if the referee decides to end the match based on the violent and verbal behaviour of their supporters towards the referee.
5.3.3.2. Teams can be eliminated from the tournament based on the behaviour of the supporters to the referee or another team.
5.3.4. Every coach must sign the match card immediately after the end of the match. Failure to sign can lead to a reprimand from his organizing committee.
5.4. Balls:
U16 – Matches will be played with balls No.5.
U14 – Matches will be played with balls No.5.

6.1. Each team must submit the squad list to the administration of the Elite Neon Cup before April 24th. After that date, we will charge an extra € 5 per player.
6.1.1. The list of rooms to be sent to the team should be received by Elite Neon Cup before April 24th. After that date, we will charge an additional € 10 per person.
6.2. Players will be controlled through the squad list that is sent from the start to the tournament management through the following procedure:
6.2.1. The team leader must bring all documents for the accreditation of the players/athletes (valid passport or ID document by the players).
6.2.2. For all teams, accreditation will be done at the tournament desk.
6.2.3. Only the team leader should be present in the accreditation procedure.
6.2.4. Players do not need to be present for age control on this day.
6.2.5. Team leaders must be present at the tournament office and present the identities of the players who are on the squad list on that day.
6.2.6. If team leaders do not come to the accreditation procedure at the tournament office, their teams cannot participate in the first match.
6.3. All teams must bring valid players’ documents for the matches(Athlete’s card).
6.3.1. Random age control can be done at any time by the staff of the tournament.
6.3.2. Age control will be through the players’ list sent from the start in our tournament along with a valid ID document.
6.4. All teams must be ready to play at least 30 minutes before the match. This time is necessary, in order to allow us, to check the squad list.
6.5. Teams who will not submit the list 15 minutes before the match can be excluded as a non-attendant team.
6.6. Teams that use non-listed players can be excluded from the tournament.

9.1. All referees are members recognized by the federation in the tournament
9.2. The coordinator for the referees during the tournament will be available at the Tournament Office.

10. Organizing committee of the tournament

10.1. The organizing committee of the tournament consists of representatives from Elite Cup and Tournaments Abroad.
10.2. The organizing committee handles protests, sanction matters, and unpredictable situations.
10.2.1. All situations that occur will be analyzed always with “Fair-Play”.
10.3. Organizational committee ’s decisions cannot be appealed. Notice that the final decision may not correspond to a FIFA rule based in Fair-Play.
10.4. In the case of any protest, a deposit of 100€ must be done in the tournament office (it may be an extra tournament office in the venues).

11.1. All protests must be made in writing by the team leader and delivered to the Organizing Committee at the latest 90 minutes after the match is completed.
11.2. Protests must be handed over to the Tournament Office.
11.3. A protest fee of € 100 will be paid. This amount will be refunded if the protest is approved.
11.4. Protests concerning referees will not be accepted.
11.5. Warnings and violations of the squad :
11.5.1. Any player who is punished with a red card loses the right to participate in the next match.
11.5.2. The tournament organizing committee may decide to suspend for further matches in the event of a direct red card being given.
11.5.3. If a player is suspended for more than one misconduct, this information will be given in writing to the team.
11.5.4. The yellow cards do not accumulate.
11.5.5. If a suspended player plays in a match, the team with the suspended player automatically loses the match 0-3.
11.5.6. Serious offenses by teams or players, will be directly reported to the Federation of that team’s/player’s.

Each player must have medical insurance. The academy is compelled all your players to be insured both inside and outside the game.
13.1. The Company does not have any group insurance to protect participants in case of injury (international participants), illness (international participants), theft or material damage and does not accept liability in any way for accidents, injuries or financial losses that may arise in the event of war, war, civil war, revolution or political disturbances or because of the actions of the authorities, strikes, exclusions, exclusions or similar events.
13.2. Participants from abroad must have personal medical insurance.

Elite Neon Cup staff at the field will provide water bottles for the teams.
The organizing committee will indicate to the head coach/team manager of each academy the point where the bottled water will be delivered.

15.1. The teams are responsible for the behaviour of their fans.
15.2. A team may lose a match if the referee decides to end the match on the basis of the violent and verbal behaviour of their supporters towards the referee.
15.3. A team may be eliminated from the tournament in the first event based on the behavior of the supporters to the referee or the opposing team.
15.4. Throughout the event, parents and supporters are prohibited from taking pictures and videos of games, and in particular on the field by using unauthorized professional means of the organizers.
15.5. Our company having subscribed to the contract-participation between itself and the teams has every right to take and record the sporting activities and the possibility of any use of the material. Elite Neon Cup provides the ability to purchase photographic and video material from our licensed partners.
15.6. Inappropriate behavior caused by parents, relatives or supporters, the company has every right to expel them – withdraws from the field by any legal and appropriate means.

16.1. For 11v11 all games will be played with size No.5 balls.
16.2. The organizing committee will provide the match balls.
16.3. The Elite Neon Cup provides balls for warming up before the matches.

The company assumes no responsibility in the event of theft of sports equipment or personal belongings of participants in the hotel or athletic venues. 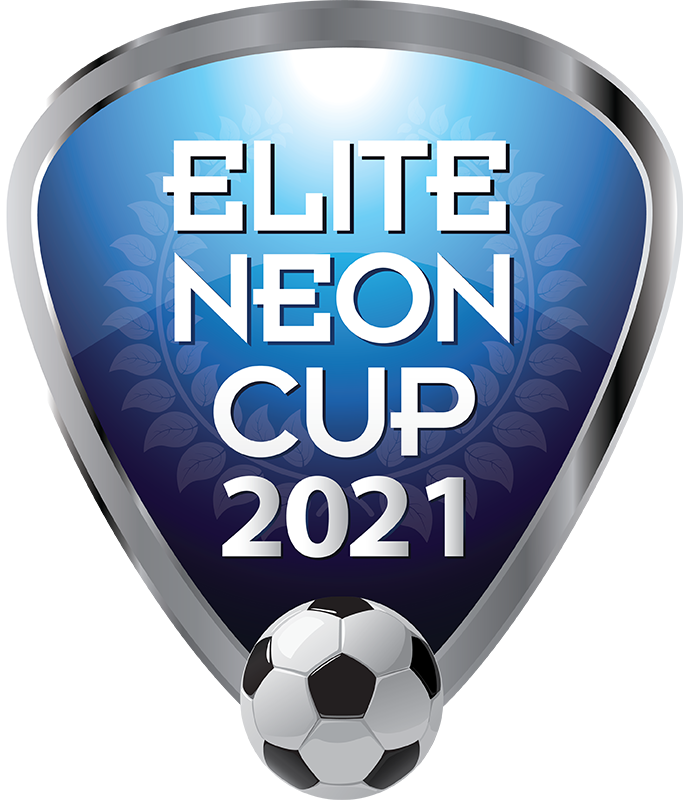 Copyright © 2021 eliteneoncup.com
All rights reserved
We use cookies to ensure that we give you the best experience on our website. If you continue to use this site we will assume that you are happy with it.OkPrivacy policy